Video Will Make Up Two-Thirds of Mobile Data Traffic by 2017: Cisco

Mobile video exceeded 50% of the total data traffic generated by mobile devices for the first time in 2012, and will account for two-thirds of mobile data traffic by 2017, according to the latest Visual Networking Index report from Cisco.

Overall global mobile data traffic reached 885 petabytes per month (0.88 exabytes) in 2012, up 70% from 2011, and is projected to reach 11.2 exabytes  per month by 2017. While the growth of tablets has led to a spike in mobile data consumption in the U.S. and Western Europe, on a global basis smartphones are still the dominant mobile device for accessing the Internet. Smartphones will account for 67.5% of mobile data traffic by 2017, according to Cisco, up from roughly 40% today. 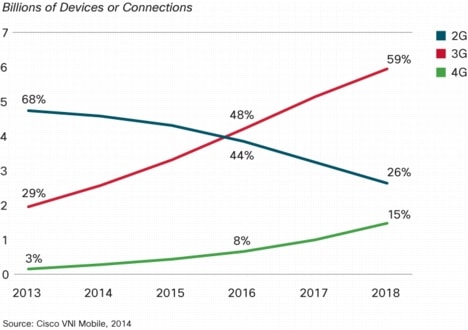 One of the report’s most striking conclusions concerned the impact that tier-pricing plans have had on patterns of mobile data consumption. Cisco tracked data plans globablly over a three-year period and found that tiered plans grew from 4% of the total to 55% over that period. While the shift to tiered-pricing plans did not slow the overall growth in data consumption, it does appear to have contributed to a significant narrowing of the gap in consumption between the heaviest users and everyone else. In January 2010, the top 1% of users accounted from more than half of all mobile data traffic; by September 2012 that had dropped to 16%. 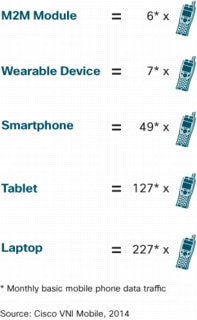 The figures suggest that tiered-pricing plans, which are often aimed at constraining the heaviest users, are working as designed. The share of traffic accounted for by the top 1% of users is now lower on mobile networks than the 1:20 ratio that has held for fixed networks for several years.